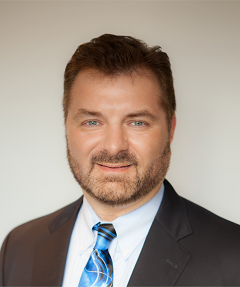 The Quick Jab
By Bill Jabjiniak

Mesa welcomes the rise of Class A office

Construction and real estate in the City of Mesa have continued to get stronger since the recession. Mesa has experienced the highest rates of growth in the development and absorption of industrial and industrial-flex space compared to other East Valley cities (Mesa, Chandler, Gilbert, Tempe) and compared to the entire Greater Phoenix region. However, in terms of office space development, Mesa has experienced lower rates of growth relative to the East Valley and Phoenix regions.

During the past 10 years, approximately 8.2 million square feet of new office space has been delivered throughout the East Valley, 92% of it occurring outside of Mesa.

Current inventory
Mesa contains 12.3 million square feet of office space which is approximately 33% of the East Valley inventory and 7% of the Greater Phoenix region. Mesa’s mix of office space is only 8% Class A. Compared to our neighboring cities Gilbert, Chandler, and Tempe where Class A office space makes up 17%, 30%, and 36% respectively[ii], Mesa has lagged in attracting new Class A office inventory.

We believe demand will continue to be strong. Just in the last year, newly built Class A space has been leased quickly, such as the 430,000-square-foot Riverview Waypoint Campus, which is now at 98% occupancy.

We are excited to attract office projects like these. Having Class A office space will increase Mesa’s competitiveness today and well into the future, better enabling the City to locate companies that bring high-paying, quality jobs to Mesa residents and important investment in our community.

UNION is a Lincoln Properties Company-Harvard Investments development that will be located just east of Sloan Park, the Chicago Cubs spring training facility and west of the Riverview shopping district. 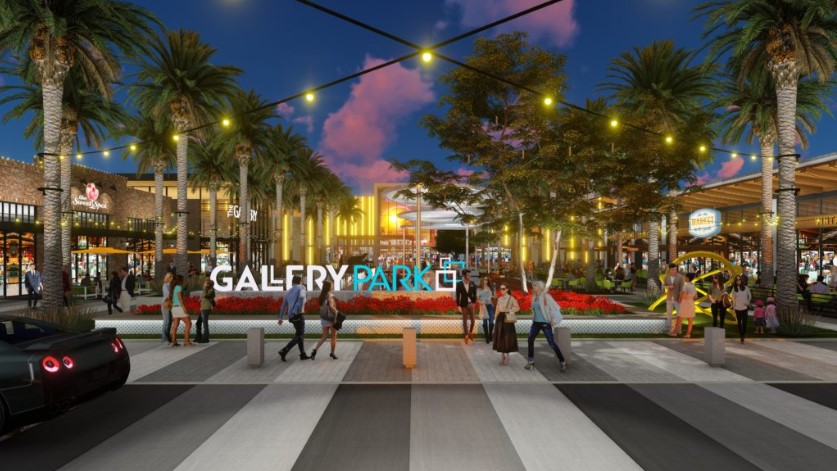 Gallery Park is a Vivo Partners development that will be located just north of Phoenix-Mesa Gateway Airport.

HIGHER EDUCATION ROUND UP

Employment of computer and information technology occupations is projected to grow 13% from 2016 to 2026, faster than the average for all occupations according to the Bureau of Labor Statistics.

To help meet the growing demand for IT professionals, the Maricopa County Community College District (MCCCD) IT Institute at Mesa is adding an AppleCare course, incorporating Amazon cloud computing into the IT Institute’s pre-established blockchain courses, and enhancing several Adobe-focused courses.

A series of AppleCare courses for Apple computer hardware repair, which lead to an industry certification, will launch in fall 2019. Adobe classes will focus on digital animation and digital imaging. Currently, students may earn industry certifications in Adobe Foundations and app development using Swift and Xcode.

Mesa Community College embedded the use of Amazon Web Services (AWS) into its kids’ summer camp and will be using AWS as a service for blockchain classes in the fall. Foundational courses leading to a certificate of completion for Amazon Web Services are under development.

"The Institute, in the heart of Mesa's Innovation District, was developed with input from the Mesa Chamber of Commerce, East Valley College Partners, and the City of Mesa in alignment with regional and local economic development objectives,” Diane Meza, Director of the Information Technology Institute, said. “Available certificates and course offerings address the immediate demand for talent in emerging technologies -- app development, big data, cloud computing, mobile and wearable technology, and the Internet of Things -- supporting a home-grown technological workforce for the East Valley."

MCCCD IT Institute classes are held at the Mesa Community College Downtown Center, 145 N. Centennial Way, Suite 201, Mesa AZ 85201. Learn more about classes and how to partner with the Institute to upskill your employees at www.mesacc.edu\iti or by contacting the ITI Director, Diane Meza at diane.meza@mesacc.edu.

NEWS FROM OUR PARTNERS 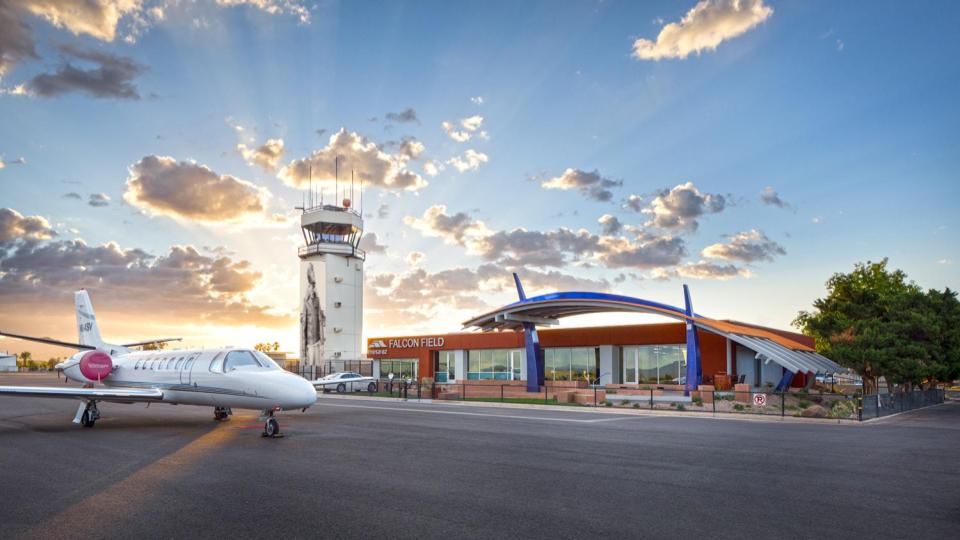 Davcon Aviation, LLC and Mesa Hangar, LLC will construct the phased project on more than one million square feet of vacant City-owned land on the northwest side of the airport.  The land will be leased for 40 years.

“We are so pleased to partner with Davcon Aviation and Mesa Hangar on this much-needed project,” Airport Director Corinne Nystrom said. “Not only will it help attract new business and jobs to Mesa, but it also will expand the diverse mix of aviation and aerospace business already here at the airport and provide opportunities for existing airport businesses to grow and expand.” 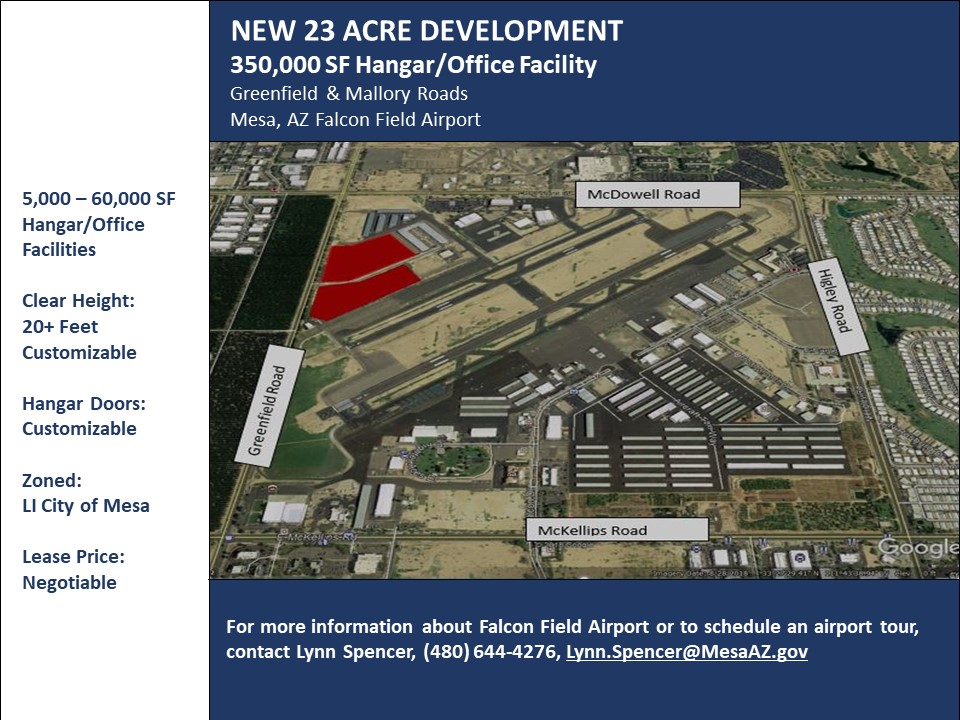 According to Lynn Spencer, Airport Economic Development Project Manager, “Falcon Field has been approached by over 50 companies in the past two years wanting to expand or relocate but hasn’t had the aircraft hangar space available to accommodate them. The current hangar occupancy rate at the airport remains at nearly 100 percent."

"Falcon Field offers a dynamic aviation community that has been poised for growth, and we are excited to answer this need that has been unavailable,” Randy Hansen, owner of Mesa Hangar, LLC said. “There are many reasons that Arizona is ranked as the national leader for aviation and aerospace attractiveness, and we are eager to be part of that.”

“This is just the type of investment Falcon Field and Mesa have needed to grow the aviation sector of our economy,” District 5 City Councilmember David Luna said. “We are excited that this development will allow us to meet the demand we’ve seen for large hangar space.”

Falcon Field is the hub of Mesa’s Falcon Business District. It is in an opportunity zone designated by the U.S. Treasury Department to spur investment. The entire project will be designed and phased based on business needs and is expected to be complete by November 2021.

To schedule a meeting about pre-leasing and leasing proposed and finished buildings, or for details about the project, contact Larry Brow of Leading Edge Real Estate, LLC at 480-535-4800 or info@edgeaz.com.

For more information about Falcon Field Airport or to schedule an airport tour, visit www.falconfieldairport.com or contact Lynn Spencer, Economic Development Project Manager, at 480-644-4276 or lynn.spencer@mesaaz.gov. 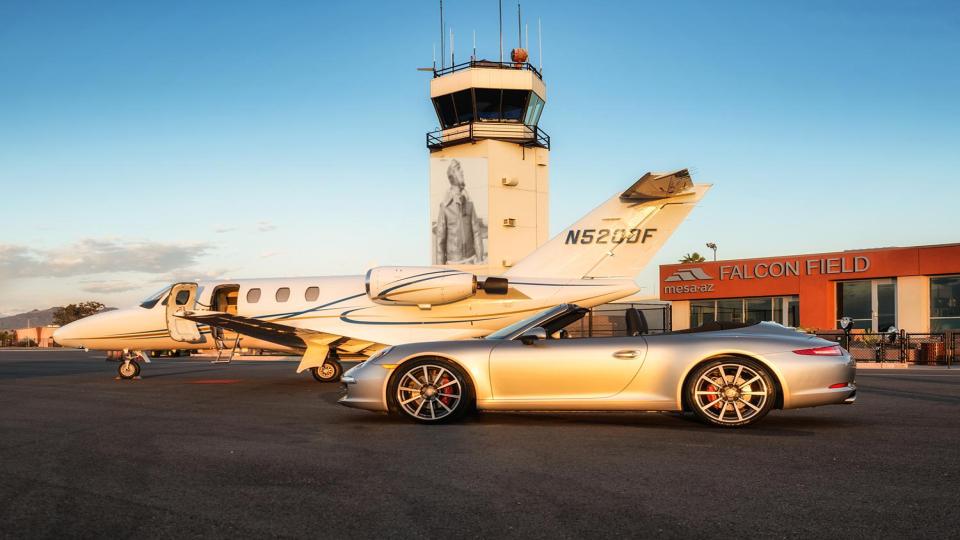 Falcon Field Airport is among the top five most active general aviation airports
in the United States, with more than 100 on-airport businesses, more than 750 based aircraft, and serving a wide variety of itinerant aviation customers. MD Helicopters operates a manufacturing facility at the airport, and The Boeing Company manufactures the top-rated Apache attack helicopter, as well as several models of unmanned aerial vehicles (UAV) on an adjacent campus. 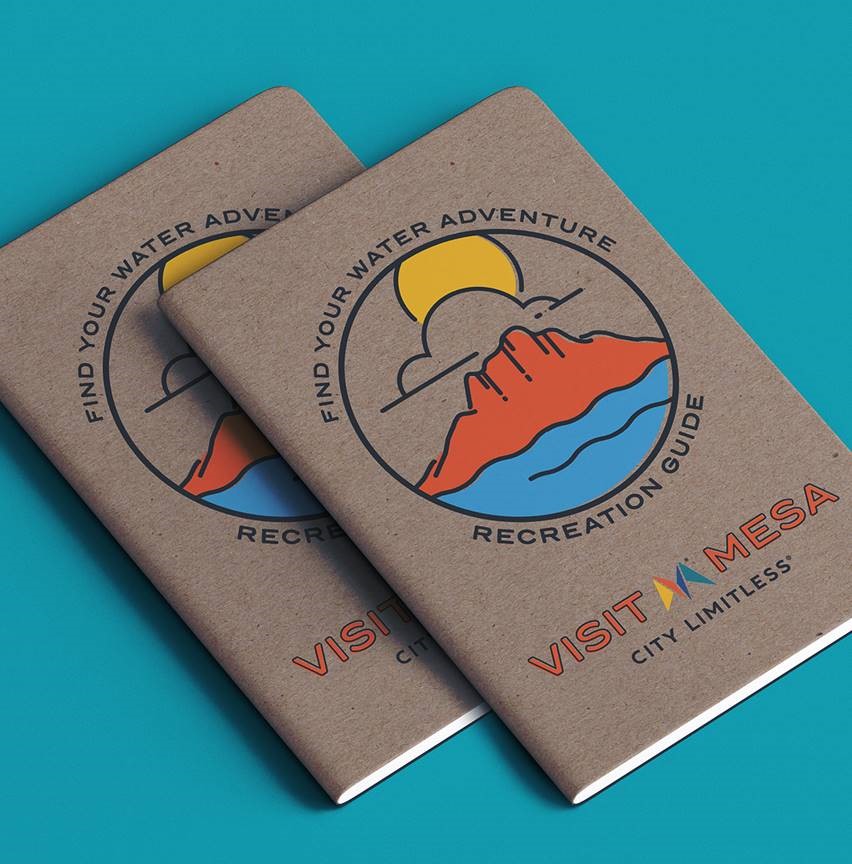 Visit Mesa launched a social media campaign promoting visitors unparalleled access to water adventures of every sort. Visit Mesa’s new Water Recreation Guide is available for download online at VisitMesa.com and showcases all the ways to cool off in the desert.

This pocket guide is the first of a series of useful tools for navigating the destination and learning about the adventure options on the water, on land, and in the air. The guide is also available for free at the Visit Mesa Visitors Center at 120 N. Center St in Downtown Mesa.

Visit Mesa’s multi-layered social media campaign included the first-ever Visit Mesa Instameet, in partnership with Mesa business No Snow SUP, which was held on June 14 at Saguaro Lake. Followers from the Visit Mesa Instagram met up for a hosted experience at Butcher Jones Beach to enjoy an afternoon on the water and connect with the Visit Mesa social media team. Each participant was provided with a Summer Survival Kit. Learn more at VisitMesa.com.

MESA IN THE NEWS

Mesa is ranked in the top 20 Best-Run-Cities in America
(azcentral.com)

The Next Tech Hub isn't Austin or Denver. It's the Phoenix-Mesa Metro
(inc.com)

ASU is in the top 10 for global patent rankings
(asunow.asu.edu)

Mesa-based Iveda announces partnership with AXIOM for its entry into South Africa
(globenewswire.com)

People chose Worth Takeaway in Downtown Mesa as the best sandwich for Arizona
(People.com)