A Smart Location for High-Tech Manufacturers and Data Centers

The Corridor has more than 1,000 acres of available, shovel-ready property for projects large and small, with access to a robust infrastructure and within 30 minutes of Phoenix Sky Harbor International Airport.

The City of Mesa has created a Planned Area Development Zone in the Corridor that reduces entitlement risk and greatly expedites the development process. The Overlay Zone is designated as light industrial. When landowners opt in, they are only required to submit the proper paperwork for administrative approval. No public hearings or further City Council action is required. Projects that might have taken up to six months to go through the entitlement process, can get approval as fast as a few weeks.

The City of Mesa maintains a substantial water and wastewater infrastructure network in the Corridor, and is continuing to expand to accommodate for future industry growth. The City is investing over $150 million to construct the Signal Butte Water Treatment Plant, which will add an additional 24 million gallons per day (MGD) of pumping capacity to the area by Summer 2018. In addition, a $200 million expansion of the existing Greenfield Water Reclamation Plant will also enhance wastewater capacity in the area by 14 MGD, bringing the total plant capacity to 30 MGD.

One of the most competitive in the nation, the Mesa FTZ can reduce or defer tariffs and duties, and can reduce property taxes by as much as 72.2% in perpetuity for qualified users.

Easy freeway on/off ramp access to Loop 202 and Interstate 10 links the area to markets across the nation. The Corridor is within a one-day drive time of the Southern California market making Mesa an excellent alternative to the higher operating costs of California.

The Corridor is conveniently located within 5 minutes from Phoenix-Mesa Gateway Airport. Gateway Airport provides commercial service to more than 47 destinations throughout the U.S. and Canada. Phoenix Sky Harbor International Airport, which provides commercial and cargo service to technology hubs around the nation and internationally, is only 30 minutes away.
www.gatewayairport.com, www.skyharbor.com

The City of Mesa has recently invested $17 million in streetscape and roadway improvements for Elliot Road, which includes road-widening to six lanes, street median improvements, landscaping, and place-making efforts, further reinforcing the Elliot Road Technology Corridor’s identity as an area for innovation and high-tech industry.

The Phoenix-Mesa metro area consistently ranks among the safest places in the U.S. for high-tech companies to do business because of its low risk of natural disaster. A 2008 study, conducted by SustainLane, ranked Mesa as the safest place in the nation when considering natural disaster risks such as hurricanes, flooding, catastrophic hail, tornado super-outbreaks, and earthquakes.

The Corridor is in close proximity to ASU’s Polytechnic campus with more than 4,000 students enrolled in science, engineering, management, technology, and education programs.

Also located within a few minutes of the Corridor is Chandler Gilbert Community College’s Williams Campus with more than 2,000 students in nursing, aviation, and applied technology programs. 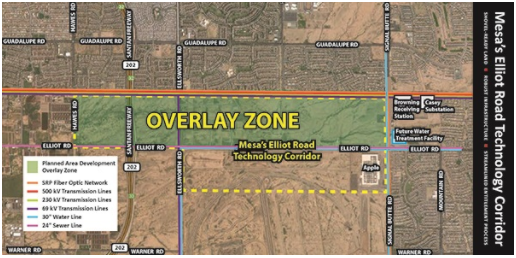 Considering expanding or relocating your business?
Give us a call. We can help.