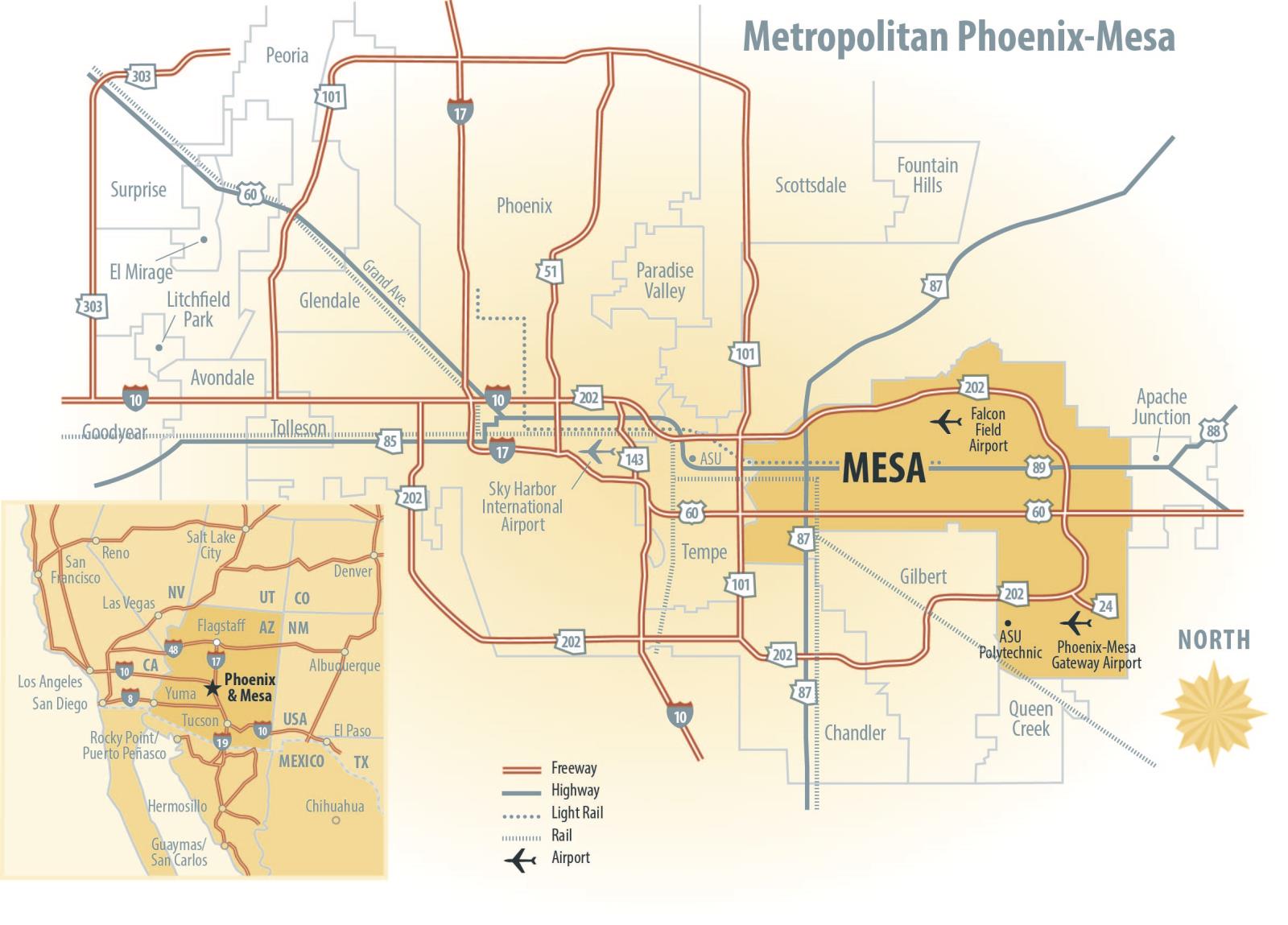 Mesa is a city on the move with an abundance of freeways, highways and state routes strategically located along commerce corridors and current and future population centers. The 101 runs along Mesa's west border and the Loop 202 circles the interior of Mesa. US 60 and SR 87 intersect in Mesa and minutes away are Interstates 10, 17 and 8, plus state routes 51, 74, 85 and 88 linking Mesa to other Arizona markets, California and Mexico.

Falcon Field Airport is the nation’s sixth most active general aviation airport, and is owned and operated by the City of Mesa. Falcon Field has more than 700 based aircraft, two runways of 5,100 and 3,800 feet, an FAA-operated air traffic control tower, a full-service fixed base operator, and hangar facilities available for immediate occupancy. There are approximately 60 acres of land available on-airport for lease and aviation-related business development with existing or planned direct taxiway-runway access. In addition, there are approximately 63 acres available for lease and non-aviation development immediately adjacent to the airport. The Falcon District in northeast Mesa is home to many aerospace companies such as Boeing, MD Helicopters, Aeromaritime, and Precision Heli-Support.

Phoenix-Mesa Gateway Airport provides commercial service to more than 45 destinations across the U.S. and Canada. The Airport has three long runways, 10,400 ft., 10,200 ft., and 9,300 ft. that will accommodate the largest aircraft in the world making it an attractive location for air cargo operations. The Airport has more than 1,000 acres of land available for development and can provide special incentives such as a Foreign Trade Zone and Military Reuse Zone that can reduce real and personal property tax nearly 73%, as well as other significant cost savings.

SkyBridge Arizona, soon to be located at Phoenix-Mesa Gateway Airport, will be the nation's first international air cargo hub to house both Mexican and United States customs. The first-of-its-kind service will enable E-commerce companies, manufacturers, and other commercial interests conducting business in Mexico and throughout Latin America to more efficiently and cost-effectively transport goods between countries, while ensuring proper inspections and safety controls.

Phoenix Sky Harbor International Airport is one of the nation’s 10 busiest and is minutes from Mesa. The Airport provides commercial and cargo service to locations around the world.

Considering expanding or relocating your business?
Give us a call. We can help.